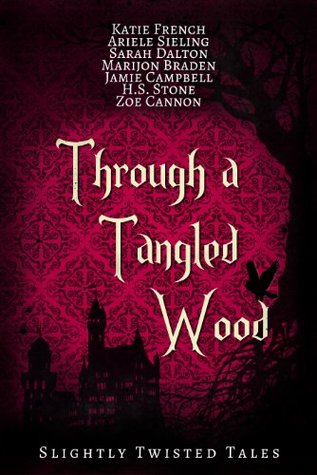 A variety of writers come together to twist traditional fairy tales into unusual and mysterious stories. From Beauty and the Beast, to Hansel and Gretel, to the Ugly Duckling, these stories will be sure to pull you into a fantastical world of princes, romance, and maybe a little science fiction.

“Plan B” by Katie French. When Nolan is selected as one of the few candidates to work in the Breeders’ hospital, he thinks all his troubles are over. Now he can afford precious medicine to save his ailing father. He’s heard of the Breeders’ cruelty, of their inhuman experiments, but he’s sure they’re fabrications. Then he stumbles into the Plan B room and learns how truly awful the Breeders can be.

“Tailless” by Ariele Sieling. A retelling of the Ugly Duckling, set on a far away planet in an unknown galaxy. While fighting a war with her people’s biggest enemy, young Bode struggles to understand why she feels out of place in her community, and why she, unlike her comrades, was born without a tail.

“I Am the Maid” by Sarah Dalton. A hostile zombie killing Maid Marian meets an ill-behaved ex-soldier Robin in this post-apocalyptic retelling of Robin Hood. When a young girl falls deathly sick, the two are forced to join forces in order to outwit the Sheriff, and the mysterious Guy Gisbon.

“Three Wishes” by Marijon Braden. When Aladdin rubbed the magic lamp, things went pretty well for him. But a few thousand years later, the world has changed and the genie is old, cranky, and doesn’t play fair. Young Alison thinks she’s found the answer to all her prayers, but instead finds that having wishes come true isn’t all it’s cracked up to be.

“Killing Snow White” by Jamie Campbell. A magical retelling of the story of Snow White, told entirely by the Evil Queen who supposedly tried to poison her. Think Snow White is innocent? Think again.

“A House in the Woods” by H.S. Stone. At the conclusion of a scavenger hunt for Old World artifacts, Hansel and Gretel find themselves lost on the outskirts of the city after dark. They stumble upon a house in the nearby woods, hoping that they will find help inside, but the house’s inhabitant has other ideas.

“Flight” by Zoe Cannon. A retelling of Beauty and the Beast. Dragged to the palace at swordpoint, commanded to cure the cursed prince with a kiss, Lucia wants nothing more than to return to her solitary world of books and magical study. But she soon discovers that she and the prince share more in common than she could have imagined… and that the truth behind his curse could destroy—or save—them both.

“Plan B” by Katie French.

Not going to lie as far as fairy tale like stories go, this was a flop. An unconscious girl was the only thing in common with the fairy tale. The actual story wasn’t too bad. I believe it ties in with the author’s Breeders series. Interesting idea, bad retelling.

I was really confused about was going on for most of this story. I assumed the characters weren’t human but it never specified what they were. Not to mention we were dropped into the middle of the action without very little explanation and there were flashbacks mixed in as well. Basically as a short story, it was too choppy for my taste.

“I Am the Maid” by Sarah Dalton.

Much better. This story feels like the story it was based on. Not to mention, the story was longer. This allowed better development of the story. There was nothing terribly new on the zombie end of the story. It was nice to see them as a more intelligent threat though.

This is what I’d want an Aladdin story to be like. A twisted genie. Wishes that don’t turn out they way you want. The short length worked really well for the story.

This was the most classic retelling of the book so far. I always love seeing the other side of a fairy tale. Turns out Snow White is the awful one of the story. The Queen was just trying to do right by her step-daughter and Snow just turned everything back on her. I may need to check out Campbell’s other fairy tale books!

This had a post-apocalyptic twist to the tale. Someone eating people is pretty scary but this was framed in a what that’s almost believable. If food is scare and hard to come by, eating people may not be that crazy anymore.

Cool twist on Beauty and the Beast. No evil enchantress here. Just a prince wishing for peace. I loved that in the end Lucia and the Prince treated each other as equals.

The bottom line? Like all anthologies some stories were better than others. Overall this collection was enjoyable.

2 thoughts on “Quick Thoughts: “Through a Tangled Wood””