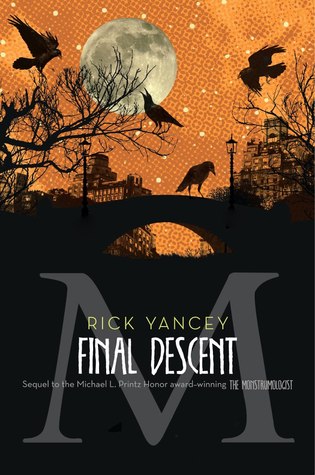 “The Final Descent (The Monstrumologist #4)” by Rick Yancey

Other books in the Monstrumologist series

Will Henry and Dr. Warthrop have encountered many horrors together—but can Will endure a monstrumological terror without his mentor?

Will Henry has been through more that seems possible for a boy of fourteen. He’s been on the brink of death on more than one occasion, he has gazed into hell—and hell has stared back at him, and known his face. But through it all, Dr. Warthrop has been at his side.

When Dr. Warthrop fears that Will’s loyalties may be shifting, he turns on Will with a fury, determined to reclaim his young apprentice’s devotion. And so Will must face one of the most horrific creatures of his monstrumology career—and he must face it alone.

Over the course of one day, Will’s life—and Pellinor Warthrop’s destiny—will lie in balance. In the terrifying depths of the Monstrumarium, they will face a monster more terrible than any they could have imagined—and their fates will be decided.

Will Henry has endured some real trials in his young life and it would be foolish to say that those trials didn’t shape him in some way. This story was the result of those trials. You could see how he changed in the short run (~3 years from our last encounter) to slightly further down the road (~15 years?) to him as an older man. I wouldn’t say he changed for the better but you knew why he changed. He encountered and dealt with creatures and monsters that no one should deal with let alone a teen boy. Combine that with losing his parents and gaining a harsh and non-loving caretaker. All of that is a recipe for a harsh and cold man.

The story was incredibly confusing. I hated jumping back and forth in time because I was never quite sure which story I was in. I’m sure some of those problems would be solved by reading the story rather than listening.

I’m still not sure what to make of the ending. I don’t really like the resolutions for these characters.

The bottom line? Outstanding series. Highly recommended especially for those who think YA books are childish or lack intelligence.

I also highly, highly recommend listening to the series if you get the chance.

P.S. The Isle of Blood would be a good stopping point if you want a happy-ish ending to these characters.