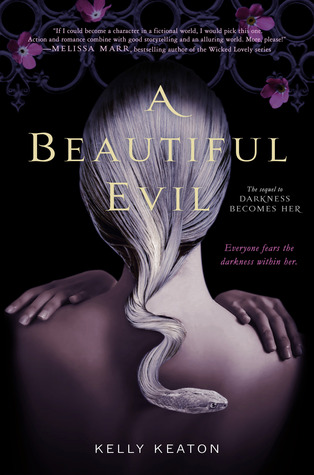 After the epic graveyard battle at the end of Darkness Becomes Her, Ari and her friends know what they’re up against: Ari is facing the Medusa curse and is haunted by the image of what she will become. To make matters worse, the heinous goddess Athena has kidnapped young Violet and is threatening to destroy Ari.

Ari, along with the superhot Sebastian, is doing everything she can to learn more about Athena and to get Violet back. But the battle of good and evil is bigger than she realizes, and she’s about to be pulled into a world more horrific than she could ever imagine….

The story still has a really cool premise but the execution is somehow boring. I was having to force myself to read.

The mythology is very odd. I know that there are tons of different interpretations of the myths out there but I’m just really unsure of Keaton’s take on it. Athena being power hungry is believable but I don’t know how other gods aren’t fighting back against her just a bit.

I’m not feeling the stakes. Ari ‘defeats’ Athena pretty quickly. Sebastian is cured after a few chapters? Henri is still alive. I hate seeing characters hurt but I want to feel some real risk in the story.