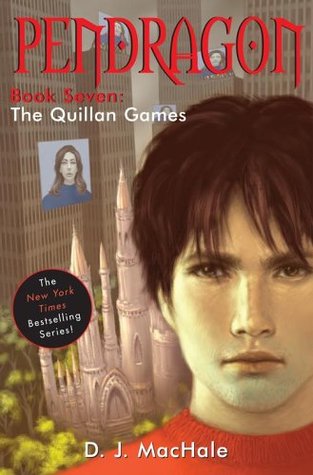 Quillan is a territory on the verge of destruction. The people have lost control of their own future and must struggle simply to survive. The only chance they have of finding a better life is by playing the Quillan Games. Hosted by a strange pair of game masters, Veego and LaBerge, the games are a mix of sport and combat. They use the people of Quillan as pawns for their amusement as they force them to enter competitions that range from physical battles, to impossible obstacle courses, to computer-driven tests of agility. To triumph in the games is to live the life of a king. To lose is to die.

This is the dangerous and deadly situation Bobby Pendragon finds on Quillan. He quickly realizes that the only way to save this troubled territory is to beat Veego and LaBerge at their own games and dismantle their horrible fun house. But there is more at stake for Bobby. The prize for winning the Quillan Games may be discovering the truth of what it really means a Traveler.

I really love how the series is maturing and growing up. It’s got the same feel but you can tell Bobby is growing up and MacHale is acknowledging his readers are growing up as well as allowing for deeper and more complex stories.  We’ve got the biggest and most pressing issue on Quillan and that’s BLOK and its power over the world. Readers learn about this monopoly gone crazy. It was easy to see how it started but it was also easy to see how it got out of control. Obviously, BLOK is a huge problem but to a certain extent the people allowed themselves get sucked into the problem. It was a nice way to learn about the dangers of monopolies  and the issues surrounding it.

Then we have the story about the games. Man, they are crazy. For reference, this book was published 2 years before The Hunger Games. The games were really scary. The rules were all over the place and nothing was off-limits. I really enjoyed getting a large variety of games. Sure, they didn’t make much sense to me but they were still cool to see.

The series is really stepping up its game. Saint Dane is getting scarier and more intense than I could have imagined. Travelers aren’t all good people which was a bit shocking. It was really jolting to see things happening “here” on the home front. You (and Courtney) can separate yourselves a bit from what’s going on because it’s happening in a different world. Now the battle has started here so it becomes much more real. Plus it’s an unsettling feeling to see things messed with and you didn’t realize it.

The bottom line? Very good. There are some interesting new twists presented.