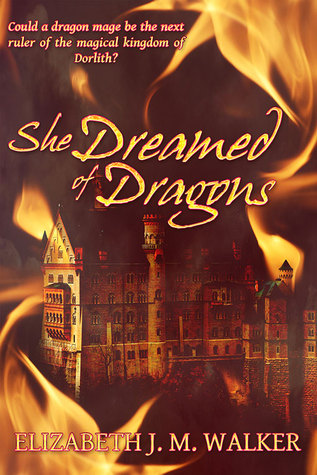 “She Dreamed of Dragons” by Elizabeth J.M. Walker

Source: The author in exchange for an honest review

Trina is more likely to set the palace on fire with her powers than be a princess – could a dragon mage be the next ruler of the magical kingdom of Dorlith?

Trina is a fifteen-year-old dragon mage in a kingdom ruled by witches and wizards – the same people who have brought dragons and other magical creatures near extinction. Trina can barely control her fire powers and is desperate for an apprenticeship, but finding a fellow dragon mage to be her teacher is proving more difficult than coming across an actual dragon.

Then there’s the Royal Tourney – a competition presented by the Queen to find a successor to the throne. Trina heads to the competition in the hopes of sparking some interest in the mage society and earning herself an apprenticeship.

She never intended to be a frontrunner in the competition.

She never meant to catch the attention of the evil witch trying to take over the throne.

She never expected to fall for a wizard.

Now Trina must face tough decisions about who she is and who she could become. Trina must ask herself: Can she really win the Royal Tourney?

This was an interesting magic world. Witches and wizards aren’t the only magical people. There are nonnies (I never figured out exactly what they were). There were also mages who I think were people whose magic powers from other creatures (elves, pixies, dragons, etc)? That was a cool idea. As you’d imagine there is some tension between all the groups. I liked that the hatred made a bit of sense but I liked that it wasn’t plain hatred across the board. Some people were a bit more open minded about being around ‘others’.

I’m always a fan of school settings so She Dreamed of Dragons was fun because of the setting. I also enjoyed the competition feel that was added to the story. These classes weren’t just for education. They were to prepare the future king or queen for their duties.  Elements of the story were definitely a bit reminiscent of Harry Potter and the Goblet of Fire.

Trina was a fairly likable heroine. She wasn’t motivated by ambition. She didn’t want to win. She just wanted to get an apprenticeship. Even when things start falling into place, she still doesn’t want the crown. She just wants what’s best for the kingdom. I didn’t totally love that everything worked out for her all the time. Sure there were some missteps but in the end everything turned out fine. I would have liked to see her struggle because it would have allowed her character to grow a bit more.

The side characters were nice enough but I wanted more from them. Eddy had a nice little turnaround with his feelings toward witches and wizards. I was really hoping to explore that a bit more because the idea of him changing his mind because of a pretty girl is bit disappointing.  Fenton was nice enough, just a bit blah. I did appreciate that his and Trina’s relationship progression was slow and natural and no love triangle!

The story ran a bit younger than I was expecting. I think Middle Grade readers could easily read and enjoy the book. In some ways, the book definitely had some MG elements to it. There wasn’t much depth to the bad guys. They were just bad and that’s it. The story also moved along pretty quick and didn’t dwell too much on had happened.

The bottom line? Very entertaining and a quick read!

One thought on “Book Review: “She Dreamed of Dragons””