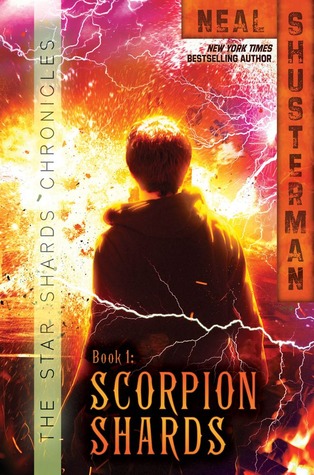 Dillon has the terrifying power to create massive amounts of destruction with the slightest tweak of his will. Deanna is so consumed by fear, it has become like a black hole, drawing to her the very things that terrify her. Then, when the glare of a supernova sixteen light-years away illuminates the night sky, they have a vision: There are six of them out there, all teenagers, and all suffering from supernatural afflictions that disfigure their bodies and souls. Only by finding one another will the six ever be strong enough to defeat these mysterious forces that, bit by bit, are devouring their souls from the inside out.

Shusterman has a really interesting mind. His books always seem to have really interesting premises. This book was no different. The idea of a supernova exploding miles away that affects 6 teenagers here on Earth is cool. The fact that their ‘powers’ are very out there is cool. Despite the fact that I though the ideas were cool, the book never fully grabbed my attention. It was horrible or bad, it was just a bit lackluster. That probably comes from the fact that this is one of Shusterman’s earlier  books and I’ve mostly read his later books. His writing has definitely improved over the years.

The bottom line? It was okay. I wouldn’t recommend this as your first Neal Shusterman book though.