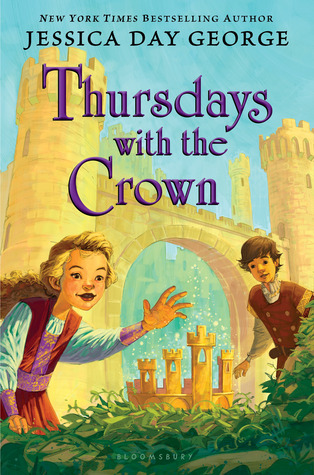 “Thursdays With The Crown (Castle Glower #3)” by Jessica Day George

Source: NetGalley in exchange for an honest review

Having been dropped by Castle Glower into the middle of a strange forest, Celie sets off to solve the mystery of the Castle’s past and what’s causing it behave so erratically now. Accompanied by her pet griffin Rufus, her brother Rolf, sister Lilah, and their friends Pogue and Lulath, Celie will have to face deceitful wizards, wild griffins, and the truth behind the Castle itself before she can find a way home.

This title is scheduled to be released October 7, 2014.

One of my favorite things about Jessica Day George’s books is how easy they are to get into. You might not have seen these characters for a while but it only takes a few chapters before feeling caught up with your friends. Thursdays was no exception. I was delighted to be back with Celie, Rufus, and company.

The story picks up pretty much where Wednesdays left off: the castle had transported the group somewhere new and a little scary. This new location allowed us to explore and learn more about the world they live in. We got to meet more griffins! I’ve made past comments about how I like the lite politics we get in this series so I was delighted to learn more about the two groups feuding in this world. It was also an interesting choice to make it so neither group was in the right. They both were doing nasty things.

There wasn’t as much character growth as there could have been but the story did take place in a pretty short period of time. Instead we got to know the characters better and know them in a different way. Rolf turns out to be a good leader even if he gets a bit jealous. Lilah turns out to be able to ‘rough it’ if she has the right company. Celie turns out to not know everything to do with griffins but is a great teacher for what she does know.

All in all, I think this would be a pretty solid conclusion. I have no idea how far George plans on carrying the series. I do love how there’s a hint of another book should George choose to write one. I would be on board for another adventure with this group!

The bottom line? Utterly huggable aka I liked it quite a bit.

5 thoughts on “Book Review: “Thursdays With The Crown””