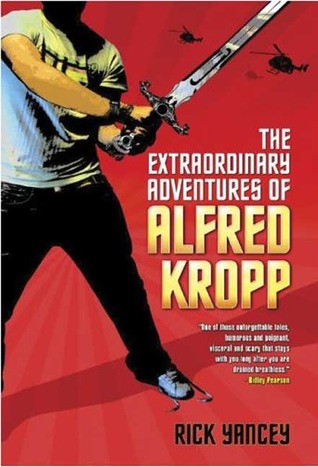 Other books in the Alfred Kropp series

Alfred Kropp was just trying to survive high school when his guardian uncle gets him roped into a suspicious get-rich-quick scheme that changes his life forever: stealing Excalibur–the legendary sword of King Arthur. But after Alfred unwittingly delivers the sword into the hands of a man with enormously evil intentions, he sets off on an unlikely quest to try to right his wrong and save the world from imminent destruction. This gripping, fast-paced, hilarious novel is both a thrilling adventure story and an engaging account of one boy’s coming of age

I love how this is basically the book equivalent of a ‘popcorn movie’. To me, ‘popcorn movies’ are those mindless movies with lots of explosions and are lots of fun but don’t have a lot of substance. The story was full of action and explosions. It moved along quickly and overall was a pretty enjoyable storyline.

Alfred was a really different type of protagonist. He really is average. Too tall, clumsy, not very smart, awkward and a screw up. Somehow he used that all to his advantage because he managed to save the day even though he wasn’t remarkable. Even as the story progresses and he learns his true heritage, he never gained new skills or other things. He was still the same Alfred we met at the beginning of the book. It was really refreshing to see a normal, everyday kid be the hero.

As for the King Arthur mythology aspect of the story,  I thought it was simply okay. I know pretty much nothing about that mythology so I can’t really comment about how the author adapted and used it. It was fun to see secret government agencies caught up in the Excalibur business though.

4 thoughts on “Book Review: “The Extraordinary Adventures of Alfred Kropp””