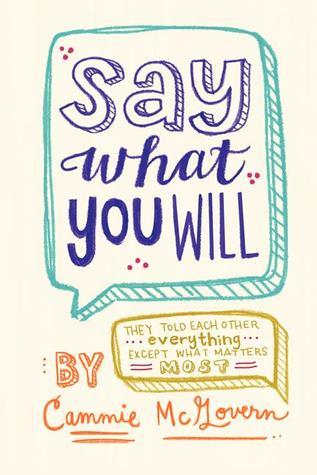 “Say What You Will” by Cammie McGovern

Born with cerebral palsy, Amy can’t walk without a walker, talk without a voice box, or even fully control her facial expressions. Plagued by obsessive-compulsive disorder, Matthew is consumed with repeated thoughts, neurotic rituals, and crippling fear. Both in desperate need of someone to help them reach out to the world, Amy and Matthew are more alike than either ever realized.

When Amy decides to hire student aides to help her in her senior year at Coral Hills High School, these two teens are thrust into each other’s lives. As they begin to spend time with each other, what started as a blossoming friendship eventually grows into something neither expected.

McGovern has a way with her leading characters. I really felt like I knew Amy and Matthew. I could see Amy and all of her struggles. I felt her need for independence. I felt her awkwardness but I also felt her strength. I really liked that for the most part she was pretty optimistic and not just her condition. She was so much more than that. Matthew had his share of struggles as well. It was great to see the evolution from not knowing he had a problem to fighting against having a problem to taking medication to finally starting to get over some of his issues.

It was great to see some diverse characters. The author wasn’t shying away from details about the disorders. Amy was sometimes a drooling mess. Matthew was sometimes quite neurotic. Nothing was glamorized. It felt pretty real. I’ve never spent time with any with CP or OCD but I’d imagine to author managed to capture a good snapshot of living with those issues.

I gotta say that I did not see this story coming. I really enjoyed the first half of the story. I liked seeing the awkwardness that comes from two kids ‘forced’ to hang out. The steady give and take of Amy and Matthew’s relationship was nice. It was good to see how they made each other better people. It was a nice evolution from friendship to something more than friends and felt totally natural. Then the story shifted in a way I didn’t see coming and I don’t think I liked it. Prom and all the messiness that came after it was just a bit odd for me. I won’t go into spoilers but both Amy and Matthew annoyed me with their behavior.

The bottom line? Despite the weird messiness toward the end, I really enjoyed this story.

9 thoughts on “Book Review: “Say What You Will””