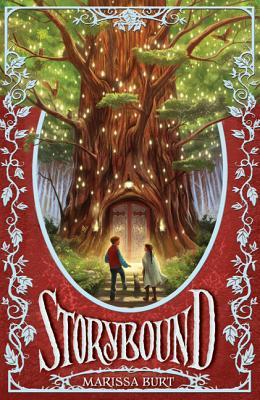 When Una Fairchild stumbles upon a mysterious book buried deep in the basement of her school library, she thinks nothing of opening the cover and diving in. But instead of paging through a regular novel, Una suddenly finds herself Written In to the land of Story—a world filled with Heroes and Villains and fairy-tale characters.

But not everything in Story is as magical as it seems. Una must figure out why she has been Written In—and fast—before anyone else discovers her secret. Together with her new friend Peter and a talking cat named Sam, Una digs deep into Story’s shadowy past. She quickly realizes that she is tied to the world in ways she never could have imagined—and it might be up to her to save it.

I’m always attracted to the idea of getting sucked into a book. The land of Story was a really interesting place. I liked that it wasn’t just one thing. It’s not just the land of fairy tale. Sure there are fairy tales there but that’s not the only thing going on. Some stories are fantasy books. I think I remember someone making a comment about a cowboy (?). Basically any story you could imagine is going on in here. In fact that’s the point. The stories we read here in the real world are taking place in their world.

I’m a sucker for the special schools. You can only guess my delight at a school where kids go to learn to be characters in books! There were classes on how to be a villain and how to eat or forage in a forest. I wish we could have ‘toured’ the school a bit more. I’d love to know what other types of classes are offered!

The characters and story aren’t what you’d expect though. There was a nice amount of depth to everyone. Professor Thornhill isn’t just a villain. Snow isn’t just a mean girl. Our dear protagonist, Una, isn’t even who she appears to be. All that leads to an interesting storyline because you never knew what to expect.

Towards the end of the book things started to get a bit messy for me. A lot happened really fast. We learned more about the Muses and the stories the Talekeepers are telling people. As usual, the people aren’t being told the truth. I wish there was a bit more time to process all that we just learned before the book ends. The ending felt a bit abrupt.

The bottom line? I didn’t totally love the story but it was a good adventure.