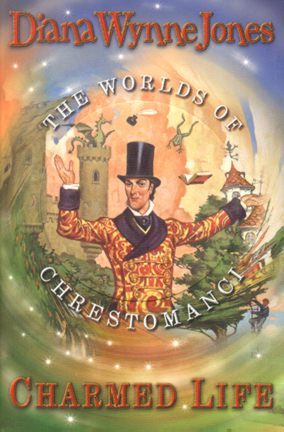 Cat doesn’t mind living in the shadow of his sister, Gwendolen, the most promising young witch ever seen on Coven Street. But trouble starts brewing the moment the two orphans are summoned to live in Chrestomanci Castle. Frustrated that the witches of the castle refuse to acknowledge her talents, Gwendolen conjures up a scheme that could throw whole worlds out of whack.

I loved the seeing the Chrestomanci Castle. It’s like a wonderful blend of boarding school and being stuck at a distant relative’s house. The boarding school vibe comes from the living and going to school in the same place. They’re given just enough freedom to be dangerous. The relative’s house vibe came from the ‘fun’ that comes from being stuck in a house you’re not familiar with and rules you’re not familiar with. Of course as it turns out they are related.

I had a love/hate relationship with Gwendolen. Obviously she’s horribly bratty. So much so that I wanted to strangle her a bit. She’s fascinating though. I was always wondering how far she would go. Cat initially seemed a bit dull. He didn’t have many powers to begin with so I thought he wouldn’t be a terribly engrossing character. He’s interesting but not engrossing. I had a sneaking suspicion that he has stronger powers than any one realizes. Thankfully I was right! Cat turned out to be pretty awesome in his own right.

I thought the idea of a Chrestomanci was interesting. Magic and non magic people live in this world together. Not everyone is nice though so there does need to be some encouragement for everyone to play together nicely. I’d love to learn more about how their government works in future books.

I’m glad my friends (Anastasia and Jenny) encouraged me to try another DWJ book. I really enjoyed this one. I hope to continue along with this series.

The bottom line? I liked it! Looking forward to reading more DWJ books.