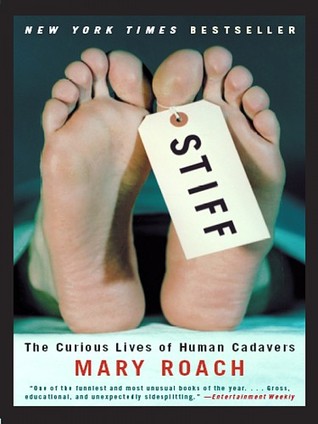 “Stiff: The Curious Lives of Human Cadavers” by Mary Roach

An oddly compelling, often hilarious forensic exploration of the strange lives of our bodies postmortem. For two thousand years, cadavers some willingly, some unwittingly have been involved in science’s boldest strides and weirdest undertakings. They’ve tested France’s first guillotines, ridden the NASA Space Shuttle, been crucified in a Parisian laboratory to test the authenticity of the Shroud of Turin, and helped solve the mystery of TWA Flight 800. For every new surgical procedure, from heart transplants to gender reassignment surgery, cadavers have been there alongside surgeons, making history in their quiet way. In this fascinating, ennobling account, Mary Roach visits the good deeds of cadavers over the centuries from the anatomy labs and human-sourced pharmacies of medieval and nineteenth-century Europe to a human decay research facility in Tennessee, to a plastic surgery practice lab, to a Scandinavian funeral directors’ conference on human composting. In her droll, inimitable voice, Roach tells the engrossing story of our bodies when we are no longer with them.

Ugh. I didn’t think through how gross this book could be. The first chapter is all about students practicing surgery on cadaver heads. Then there’s the entire chapter on cannibalism. Eeeek. The book isn’t as gruesome as it could be but for someone squeamish, like I am, it was a bit much in places. The book is still worth reading even if you’re squeamish, just be prepared.

I was surprised at how readable the story was. I was worried because I’m not a huge science person even if I find the stuff interesting. Roach was able to make most of the book pretty easy to understand for a typical non-science person. I was also pleasantly surprised that the book wasn’t too boring! I’m trying to stop associating non-fiction with boring but it’s going to be a long process. For the most part, the book was pretty interesting. There were only a few chapters that bored me and I just skimmed over them.

I thought some of the humor was odd. Sometimes it felt forced. Other times it was a bit more natural because the whole situation was weird and she was attempting to make herself and us feel better. As weird as the humor was, it was mostly welcome because it made the book a very different type of non-fiction book.

The bottom line? Interesting book on a grim subject!

I read this as part of my Reading Outside the Box Challenge. This was for my Non-Fiction square. See my progress here.