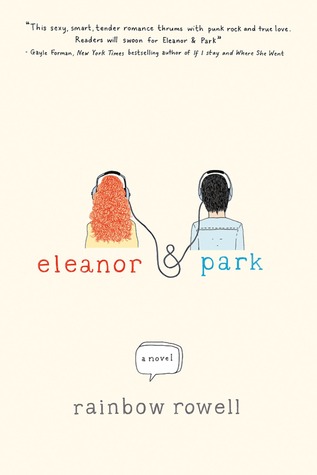 Eleanor… Red hair, wrong clothes. Standing behind him until he turns his head. Lying beside him until he wakes up. Making everyone else seem drabber and flatter and never good enough…Eleanor.

Park… He knows she’ll love a song before he plays it for her. He laughs at her jokes before she ever gets to the punch line. There’s a place on his chest, just below his throat, that makes her want to keep promises…Park.

Set over the course of one school year, this is the story of two star-crossed sixteen-year-olds—smart enough to know that first love almost never lasts, but brave and desperate enough to try.

While I enjoyed this book, I wasn’t wowed by it like everyone else was.

Blah. Instalove is the worst. I understand how Eleanor and Park fell into liking each other quickly enough. They didn’t have a lot going for them. I just didn’t buy the grand declarations of love and need for the other one after only talking for a few weeks (and doing the non-taking thing for weeks longer). Blah, blah, blah, yes I know teenagers are impulsive, etc. It doesn’t mean I buy it though. Even as the romance progressed, I still wasn’t totally buying the love. To me, it felt more like they didn’t have any other options and that’s why they were together rather than person one liking person two because of who they are.

Rowell did good job of showing how Eleanor didn’t really fit in anywhere. You felt how miserable she was at home. You saw how miserable she was at school. Park needed more work. We’re just told he’s a misfit/outsider. I didn’t really see it. He has friends. There were only a few comments from his dad about him not being masculine. I would have loved to see him be more curious about his Korean heritage from his mom.

There was a really great scene between Park and his mom after they saw Eleanor and her family in the store near Christmas. His mom didn’t really like her until they saw Eleanor in a more ‘natural’ environment. Park’s mom gives him a gift to give Eleanor from her because she understands the difficulties of coming from a large family. In big families, there’s never enough anything so you get what there is even though it’s not enough. It was a nice window into what life was like in Korea for her. I would have loved so see more scenes like that. I know it’s probably difficult for her to talk about but little moments like that sprinkled throughout the book would brought her to life for me more.

The storyline had good intentions but it felt like there was almost too much going on for me. Eleanor was dealing with bullying, abuse, and poverty.  Those are subjects that should be explored more in YA lit but there wasn’t enough time to explore all of them in as much depth as it could have been.

The bottom line? Liked it but it wasn’t my favorite Rainbow Rowell book.

I read this as part of my Reading Outside the Box Challenge. This was for my Young Adult square. See my progress here.