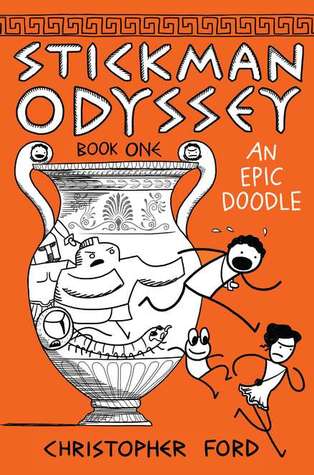 When Zozimos is banished by an evil witch (his stepmother!) from the kingdom of Sticatha-the kingdom he was next in line to rule-he trains at battle (if you call chasing after butterflies training), travels across stormy seas (thanks for that, Poseidon), slays golems and monsters (with a lot of help), charms beautiful women (not really), and somehow (despite his own ineptitude) survives quest after quest. By the love of Zeus, though, none of it brings him any closer to home!

It does, however, make for one quirky, original, giggle-provoking graphic novel sure to appeal to any kid interested in Greek mythology, or merely looking for an entertaining read.

This was so much fun! Turns out this isn’t a retelling of the Odyssey. It’s a comic of a Homer-like poem with a new hero. Despite that, I enjoyed the story. I read a few Greek poems/stories in high school and I’ve seen those stories slipped into other media over the years. I was familiar enough with epic poems/Greek stories that I could see what the author was trying to do.

The story really did feel like an epic poem. It was adventure after adventure. We had all the things you would expect from a story like this: quests, gods, monsters, witches, and dysfunctional families. It had those “classical” element but there were also newer twists to the story: spider monsters, candy islands, and silly humor. Overall, it was a good mix of old and new elements.

This did fantastically as a graphic novel. It just goes to show you that you don’t always need super fancy artwork to tell a story. Black and white stick figures can absolutely tell an engaging story. Even though the story could have been fleshed out a lot, I didn’t miss that ‘extra’ stuff because I was too engrossed in the story.

The bottom line? Don’t go into this expecting a retelling of the Odyssey. It’s simply an enjoyable nod to Greek epic poems.

I read this as part of my Reading Outside the Box Challenge. This was for my Graphic Novel  square. See my progress here.