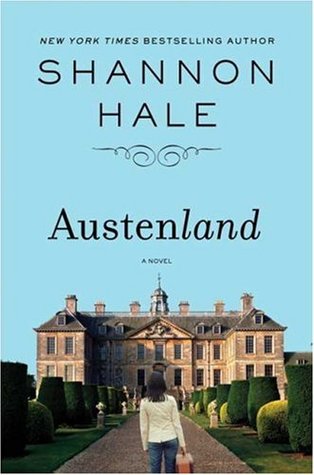 Jane Hayes is a seemingly normal young New Yorker, but she has a secret. Her obsession with Mr. Darcy, as played by Colin Firth in the BBC adaptation of Pride and Prejudice, is ruining her love life: no real man can compare. But when a wealthy relative bequeaths her a trip to an English resort catering to Austen-crazed women, Jane’s fantasies of meeting the perfect Regency-era gentleman suddenly become realer than she ever could have imagined.

Decked out in empire-waist gowns, Jane struggles to master Regency etiquette and flirts with gardeners and gentlemen;or maybe even, she suspects, with the actors who are playing them. It’s all a game, Jane knows. And yet the longer she stays, the more her insecurities seem to fall away, and the more she wonders: Is she about to kick the Austen obsession for good, or could all her dreams actually culminate in a Mr. Darcy of her own?

I didn’t accidentally watch the movie first. I knew about the book first but didn’t have any interest in reading it. I ended up watching the movie because I was in the mood for a cute fluffy movie. I had a lot of fun with the movie so I decided I needed to read the book!

The book was just what I was wanting. It was chick lit but it knows it’s chick lit. Our main character knows not to take her trip too seriously. Jane was incredibly easy to relate to. Who hasn’t had an embarrassing obsession before? Jane’s obsession with Mr. Darcy and all things Austen is really taking over her life. I wasn’t sure how love for a fictional character could damage someone’s relationships but Hale made it very clear. Jane had some really, really bad, icky relationships. They’re highlighted throughout the novel. It made it clear that her relationship history wasn’t a good one. It made sense for her to fall for this wonderful fictional character. It’s a double edge sword though because to find someone exactly like Mr. Darcy is going to be impossible. More than likely Jane was running guys off simply because they didn’t meet her expectations even if they might have been nice men.

I was a little disappointed that Jane’s trip to Austenland was meant to turn her away from all things Austen. (What’s so wrong with embracing something you love?) I loved Jane’s struggle with how to enjoy Austenland. She initially feels awkward and self conscious because she is a grown woman playing dress up. She soon starts to have a bit of fun before she realizes she’s out of place even here. She’s ‘poor’ in the context of the story so her opinion and feelings mean nothing. That really annoyed me. Why would the owner make someone feel so crappy when they’re spending a bunch of money to be there? Jane finally decides to give in and have as much fun as she can even if it means making a fool of herself before giving up all things Austen for good. It was good to see her go through some grieving/mourning for that time of her life.

I actually liked all the romance in this book. Martin was a breath of fresh air in the stuffiness of the place. It’s a shame he turned out like he did though. Mr. Nobley was really good though. I loved that he felt like an Austen love interest even though he probably wasn’t trying to act like that. He just feels silly with the whole situation so he can’t let himself act normal. That definitely comes through. He’s so much better when he becomes honest with Jane.

I quite liked the book even though I saw the movie first. I’d probably rank them about the same. The movie does do a few things better though. I love Mr. Nobley’s twist of being a history professor and not an actor. It makes everything make more sense and makes me love him more. I also liked how the characters are portrayed in the movie. Miss Charming is loud and loveable. Jane and Mr. Nobley make me want to squeal with delight. The book gets points for portraying Jane’s past.

The bottom line? I don’t read much chick lit but this was really enjoyable!

I read this as part of my Reading Outside the Box Challenge. This was for my Accidentally Watched the Movie First square. See my progress here.