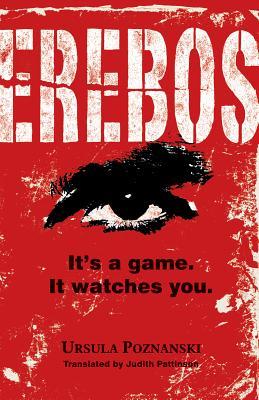 An intelligent computer game with a disturbing agenda.

When 16-year-old Nick receives a package containing the mysterious computer game Erebos, he wonders if it will explain the behavior of his classmates, who have been secretive lately. Players of the game must obey strict rules: always play alone, never talk about the game, and never tell anyone your nickname.

Curious, Nick joins the game and quickly becomes addicted. But Erebos knows a lot about the players and begins to manipulate their lives. When it sends Nick on a deadly assignment, he refuses and is banished from the game.

Now unable to play, Nick turns to a friend for help in finding out who controls the game. The two set off on a dangerous mission in which the border between reality and the virtual world begins to blur. This utterly convincing and suspenseful thriller originated in Germany, where it has become a runaway bestseller.

Wow, talk about a thrilling ride! Who knew a book about a computer game would be so engrossing? I know I was a bit leery about reading a book about gaming. I’m not a gamer and will probably never be one. It doesn’t appeal to me. Erebos was able to draw me (a non-gamer) in and keep me hooked. I loved that.

The story spent a good mix of time in the game world and the real world. The game world was totally creepy. The game started out interesting enough but the real ‘fun’ starts when it starts picking up on things in real life. What someone searched online. Who someone talked to. It’s a bit unsettling for a game to know all that. I just wasn’t totally drawn into the game and couldn’t empathize with the characters doing totally horrible things to level up. Maybe it was because I wasn’t the one playing the game but I just couldn’t imagine being so into a game that I would actually contemplate harming someone.

The real world annoyed me at first because like Nick I just wanted to learn more about Erebos. After he ‘snapped’ out of it, I really enjoyed the story in the real world. I loved seeing other people’s theories on the game. I loved the research they did and what they pieced together. That aspect of the story was a good mystery.

I mostly liked the way the story ended because it made sense. It was good payback for the victim (except for the attempted murder part). I just wish other people hadn’t been harmed in the payback. I was just a smidge disappointed that there was a person behind it. I was kind of hoping for a possessed computer. That was amazing computer programming though. It’s a shame that it was used in such a nasty way. I liked the original idea of the program though (going out and doing nice things for other people and forcing you to meet new people).

The characters were the only things that were a bit lacking. Everyone was getting on my nerves with how high strung they were about the game. They were too snippy and nasty. It made it hard to really get to know anyone. You just got to see them at their worst.

I’m very happy to report the book didn’t get lost in translation! Everything came across beautifully. It read about like any other English book I’ve read set in Europe.

The bottom line? Quite thrilling!

I read this as part of my Reading Outside the Box Challenge. This was for my  Lost in Translation square. See my progress here.