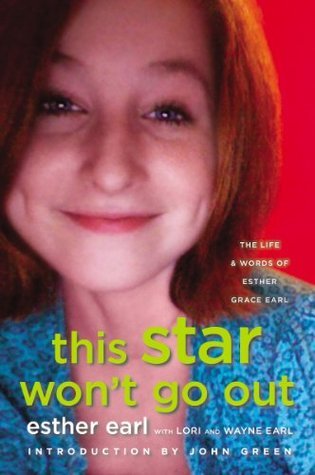 “This Star Won’t Go Out: The Life and Words of Esther Grace Earl “ by Esther Earl, Lori Earl, and Wayne Earl

A collection of the journals, fiction, letters, and sketches of the late Esther Grace Earl, who passed away in 2010 at the age of 16. Photographs and essays by family and friends will help to tell Esther’s story along with an introduction by award-winning author John Green who dedicated his #1 bestselling novel The Fault in Our Stars to her.

This will definitely be a hard book to ‘review’.  This was a wonderful tribute to a wonderful girl. Esther’s voice and personality shine through brilliantly in her journal entries and other writing. You really get to know her. I love that she’s not too sorry for herself. Yes, obviously she gets upset and depressed about the situation but she keeps on going. She tries to be as good a sister and friend as she can be in the situation. She’s perpetually happy which really is inspiring.

I love that they didn’t do any editing to Esther’s words. As a result, her teenage, bubbly voice was on full display. I just wish there had been some better organizing to the entries. We could go through months of entries on one platform and then jump back 6 months because we had moved on to another platform. It was a bit confusing for sure.

Even though this book was about Esther, I would have loved to hear about other people’s perspectives on the situation. They didn’t sugarcoat anything about the pitfalls of cancer. I would have loved to see that expanded to the family. There were passing comments about how little money the family had. There were other comments about how the sisters grew apart when Esther got sick. It would have been nice to hear how other people cope with the situation. One person maybe sick but many people are hurting because of the situation.

The bottom line? A fascinating look at life with cancer.