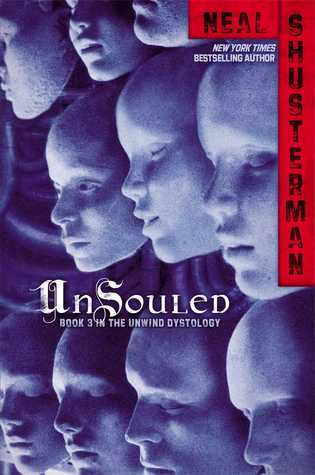 Connor and Lev are on the run after the destruction of the Graveyard, the last safe haven for AWOL Unwinds. But for the first time, they’re not just running away from something. This time, they’re running toward answers, in the form of a woman Proactive Citizenry has tried to erase from history itself. If they can find her, and learn why the shadowy figures behind unwinding are so afraid of her, they may discover the key to bringing down unwinding forever.

Cam, the rewound boy, is plotting to take down the organization that created him. Because he knows that if he can bring Proactive Citizenry to its knees, it will show Risa how he truly feels about her. And without Risa, Cam is having trouble remembering what it feels like to be human.

With the Juvenile Authority and vindictive parts pirates hunting them, the paths of Connor, Lev, Cam, and Risa will converge explosively;and everyone will be changed.

Shusterman is a master of story weaving. The thought that went into the pacing and intricacy of the book is fantastic. Everything little thing that is revealed is important.

I love seeing so many sides and perspectives in the story. Unwinding not just a right/wrong situation. There are SO many levels of right and wrong on the issues it’s tough to wrap your head around. Is unwinding okay if someone actually agrees to it and the organs/body go to someone in real need? Is is more wrong to unwind a teen who is going through a rebellious stage than unwinding a convicted felon?

The characters were all over the place. I know I was on the fence about Cam in the last book but now I really don’t like him. His fixation on Risa is really weird. I’m getting really bad feelings about how things are going to go do especially since he’s oblivious to the fact that she doesn’t really like him. I love that Connor is a pretty flawed character. He’s the guy you want to cheer for but he can be hard to like. He’s not the kindest guy to be around and then on top of that he’s coping with Roland’s arm leaking Roland’s personality into him. Very creepy. I was kind of disappointed that Lev stayed on the reservation. It seems like an easy out. I’m really hoping he has a plan for things to come. I got to say I’m a bit disappointed with what they did with Risa’s character. They just kind of stuck her in a love triangle. What disappointed me more what Risa actually played into it. She would be a bit flirty with Cam whenever Connor was annoying her etc. That’s really not going to end well… I’m hoping her character turns out better in the final book.

The bottom line? Great installment! I can’t wait to see how things end.

I read this as part of my Reading Outside the Box Challenge. This was for my Science Fiction square. See my progress here.