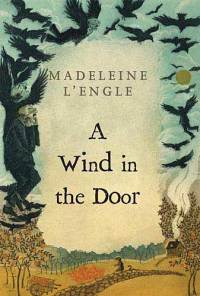 “A Wind in the Door” by Madeleine L’Engle

Other books: A Wrinkle in Time

A Wind in the Door is a fantastic adventure story involving Meg Murry, her small brother Charles Wallace, and Calvin O’Keefe, the chief characters of A Wrinkle in Time. The seed from which the story grows is a rather ordinary situation of Charles Wallace’s having difficulty in adapting to school. He is extremely bright, so much so that he gets punched around a lot for being “different”. He is also strangely, seriously ill (mitochondritis – the destruction of farandolae, minute creatures of the mitochondria in the blood). Determined to help Charles Wallace in school, Meg pays a visit to his principal, Mr. Jenkins, a dry, cold man with whom Meg herself ahs had unfortunate run-ins. The interview with Mr. Jenkins goes badly and Meg worriedly returns home to find Charles Wallace waiting for her. “There are,” he announces, “dragons in the twins’ vegetable garden. Or there were. They’ve moved to the north pasture now.”

Dragons? Not really, but an entity, a being stranger by far than dragons; and the encounter with this alien creature is only the first step that leads Meg, Calvin, and Mr. Jenkins out into galactic space, and then into the unimaginable small world of a mitochondrion. And, at last, safely, triumphantly, home.

I have such mixed feelings about this book. On one hand, we get to see the characters again! Meg, Charles Wallace, and Calvin really made A Wrinkle in Time for me so I was excited to see them again. We get to see them in different circumstances this time so we see a different side of them. Meg continues to struggle with figuring how who she is. Calvin continues to be wonderfully supportive and a good friend to the Murry family.

And there was Charles Wallace… I’m so glad that the author chose to tackle this issue. In A Wrinkle in Time we see that Charles Wallace is smart. Incredibly smart but not in the normal way. We’re not talking about a 5 year old who is able to read picture books by himself. We’re talking a whole other world smart. There’s nothing wrong with this because I’m sure there are kids like this out there. It just brings up the issue of this is not a normal occurrence so he will have problems fitting in with his peers. Sure enough in A Wind in the Door Charles Wallace is picked on because of how he acts. I like the way L’Engle handled the issue. She emphasizes that Charles Wallace needs to adapt to his surroundings not change who he is. I think that’s a good lesson for all of us to take to heart.

Now on to the story. Oye. This book is a perfect example of why I’m cautious in reading Science Fiction and Fantasy books. In Science Fiction/Fantasy the only limit is the author’s imagination so we could really go anywhere. This book was way, way too out there for me. A Wrinkle in Time pushed me to my limits and I could follow along with what was going on but just barely. A Wind in the Door just left me out in the cold wondering what the heck just happened. It’s a short book but I was completely confused about what was going on for most of the story. I didn’t understand much of what was going on other than Charles Wallace was ill and Meg was attempting to get him better.

The bottom line? I was too confused to enjoy much from the story. If A Wrinkle in Time was too much for you, tread lightly with this book.