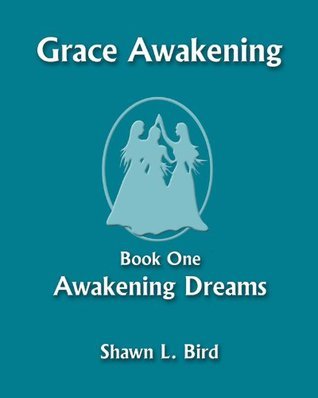 Source: The Author [Thank you!]

Grace Awakening Book One: Awakening Dreams is an urban fantasy YA novel set in Calgary, Alberta Canada. Within the shadow of the Rocky Mountains, Greek gods are walking among the population and a battle is unfolding to the destroy love, beauty and radiance that makes all art and music possible. Grace only knows that she is incapacitated by the music of Ben, who seems sure that he’s been in love with her forever. She also knows that she has become the target of mysterious attacks in school and around the city. As she awakens to the connection her dreams have to another world, Grace realizes she has a bigger destiny than she could have imagined. In Grace Awakening modern first love is entangled with ancient myth. It’s Twilight meets Percy Jackson.

When first approached about this book, I was nervous. When anything is described as similar to Twilight, I have to fight the urge to vomit. The author assured me it wasn’t really a paranormal romance. I decided to trust her because my love of Percy Jackson took over.

Yeah, definitely not like Twilight. I like Grace. I LOVED that she realized that having a guy pine after you, chase you, and claim to love you after just meeting is creepy. THANK YOU, we finally have an intelligent, normal female for once.  For the first bit of the story, she continues to act like how you should when a guy you don’t know kind of stalks you. We need more female protagonists like this.

The story was engaging. I actually sat down intending to only read a chapter one night and ended up neglecting the other book I was supposed to be reading because I was involved with this story. I finished the whole book in less than a day. That’s how engrossed I was with the story.

Yes, there is romance in the book but it’s done in the right way. It’s not “I just met you and swoon now I’m totally in love with you”. It’s the “get to know the person, date for a while, and THEN fall in love”. Some of the romance stuff was cheesy but that kind of goes with any book with romance in it. Not to mention it is a YA book so YA books with romance are most definitely cheesy.

The Greek mythology of the story is a bit murky. I do know a bit of Greek mythology so I saw some things come into place. I’m still a bit in the dark about some of it but this is the first book in a series so I’m sure other things will fall into place as the story continues. I appreciated the fact that the author used some lesser well known mythology figures in the story. There’s even a glossary at the back of the book!

Pick this up if you want a fun YA book especially if you’re into mythology.