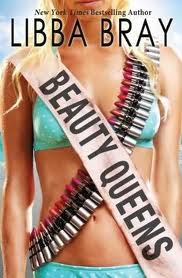 The fifty contestants in the Miss Teen Dream pageant thought this was going to be a fun trip to the beach, where they could parade in their state-appropriate costumes and compete in front of the cameras. But sadly, their airplane had another idea crashing on a desert island and leaving the survivors stranded with little food, little water, and practically no eyeliner.

What’s a beauty queen to do? Continue to practice for the talent portion of the program–or wrestle snakes to the ground? Get a perfect tan–or learn to run wild? And what should happen when the sexy pirates show up?

Welcome to the heart of non-exfoliated darkness. Your tour guide? None other than Libba Bray, the hilarious, sensational, Printz Award-winning author of A Great and Terrible Beauty and Going Bovine. The result is a novel that will make you laugh, make you think, and make you never see beauty the same way again.

I had been hearing buzz about this book for months and thought the premise sounded fun. When I saw this on the rack of new books at the library, I immediately grabbed it.

Honestly, I was a bit disappointed by the book. Maybe I had too high of expectations, after all I kept hearing comparisons to Lost. Maybe it was too “funny” for my taste. I don’t know. The book wasn’t bad by any means. It just wasn’t what I was expecting.

The story and how things played out is very juvenile. It reminded me a lot of a Disney Channel movie but made for older teens (and with more mature content). It was silly but cliche. The story isn’t too original. I recognized bits that were directly influenced by Lost, Lord of the Flies, Miss Congeniality, and countless other stories. With all that said, it was still a fun, silly story. A perfect beach read.

The humor in the book was interesting. It was very much a satire/social commentary of the world. The Corporation was mocking the media conglomerates we have in our world and showing how things could potentially be. Between the chapters there were little “commercial” breaks of products from The Corporation, which were funny, over the top and ridiculous. There were even interviews with the contestants so you could keep everyone straight, which was very helpful. There were tons of footnotes doing product placement from The Corporation to further drive home the point the author is making.

I appreciate what the author was trying to with the humor but honestly I think she took it too far. I know she needed to set up the world of the book but it was way too much in your face. It got to the point where I was just flat out annoyed with it all and didn’t want to read the book anymore.

The cast of characters was amusing. It was a good mix of girls. I did have a problem trying to keep everyone straight because there were so many girls. That was the biggest downfall. There were only a small amount of girls who survived the crash. From there Bray focused on several girls giving them back stories as well as problems and a story on the island. Then there were other girls that were just there for humor? Like Miss New Mexico, she had a tray stuck in her head the whole time but that’s about all she does. Why keep these minor characters if you’re not going to do anything with them?

Amusing afternoon read but I don’t think I will be picking up anymore of Bray’s books in the future. Her style? Not for me.